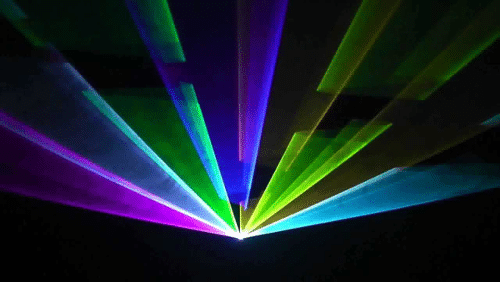 As cutting-edge technology explodes in the direction of autonomous driving and machine vision, structured light has become an integral part of the development and implementation of these innovative fields. Structured light is a common method in which a known pattern is projected onto an object or scene, and by measuring the returning deformed pattern (resulting from the geometry of the surface of the object), a vision system can calculate depth, movement, and several other parameters. Holo/Or has the capability to custom design and manufacture DOE with complex structured light patterns for laser systems. These patterns can vary in many ways–including shape, texture, and angle–according to the customer’s application.

LiDAR, or Light Detection and Ranging, describes the method with which distances can be measured with pulsed laser light. The laser source illuminates the target from some distance, and a sensor measures the reflected pulses of light. Small differences in the pulses’ return times and wavelengths allow for 3D mapping of the target.

Another technique for measuring unknown distances is triangulation. In this approach, a triangle is formed between a laser measuring system, a camera or optical sensor, and the target object. With the known distance between the camera and the laser, and the measured distance between the laser and the target, the third side of the triangle (target to camera) can be easily calculated.

LiDAR applications are endless, ranging from machine vision and autonomous driving to aerial and satellite mapping. Compact LiDAR systems can be mounted on drones for discrete and inexpensive surveying. In many LiDAR applications, multiple laser beams are used simultaneously to scan the examined area. Holo/Or has an entire line of multi-spot beam splitters and shapers that effectively transform a beam from a single laser source into multiple laser beams or lines. Custom designs can be tailored to fit specific output shapes and sizes, as well. 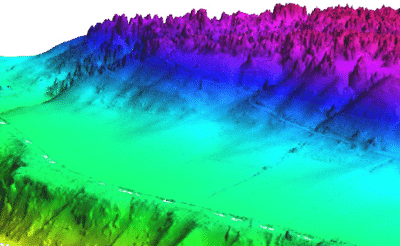 Many 3D sensing technique utilize projected patterns of spots or lines to detect objects such as faces, people or other objects of interest. DOE can be used to generate such patterns  , Either by splitting the spot of a single emitter laser or by “stitching” multiple VCSEL spot patterns to achieve a large field of spots.  Holo/Or has extensive experience in modeling and designing special DOE that are tailored to our customer’s VCSEL emitter profile, giving perfect stitching of the individual VCSEL fields, with no gaps or overlap of spots. By using our proprietary in-house design methods, we can minimize Zero Order   , ensuring your 3D sensing product meets your eye-safety requirments.

For certain applications it is useful to create a projection marking system instead of physical marking. This way, markings can be instantly changed or turned off without physically attending to the marked object. For example, road markings that change with the hour or floor markings in a warehouse that change with current inventory. Projection marking is crucial for several medical treatments, such as radiation therapy, to make sure the target area is being treated with high accuracy. Holo/Or can create a custom structured light pattern for projection marking in almost any shape or design. 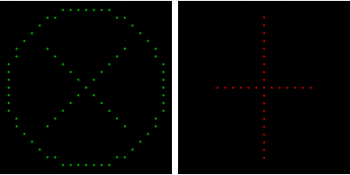 Applying a structured light pattern for the use of surface inspection is an efficient way to accurately assess a large area for cracks and imperfections. A 2D light pattern is illuminated on a surface, and the reflection of the light back into a detector is then processed and analyzed (by the triangulation method). Places of imperfection on the surface will not reflect as expected, and the location and magnitude of the imperfection can then be measured based on this discrepancy.

A custom structured light pattern can be designed to fit the inspection needs, varying in illumination pattern features and divergence angle to modify the inspected surface area.

Figure 4. Laser grid inspecting the contours of an object. 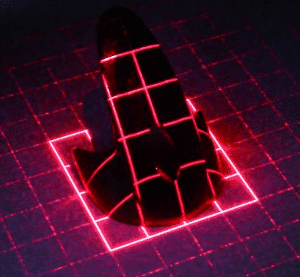 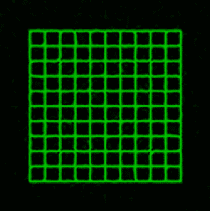 Structured light has several important fucntions, such as detecting the location of a leak in a gas pipe, identifying cracks in a freeway tunnel early on that can prevent expensive future structural repairs, for endoscopy and colonoscopy diagnostics, and accurate measurements inside both narrow and wide cylindrical structures. Specifically, a structured light pattern of concentric circles can be used for 3D mapping of the tube walls. This type of light pattern has recently been proven to be most appropriate for these mapping applications. A concentric circles pattern is defined by its full angle and number of rings, which can be tailored to fit the application needs. 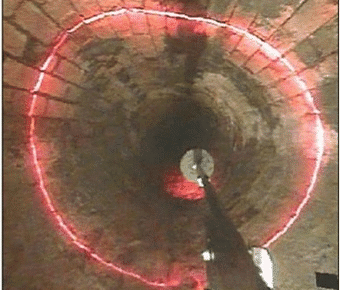 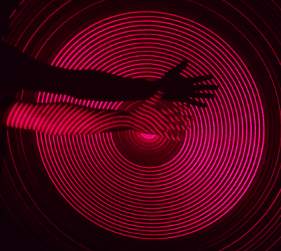