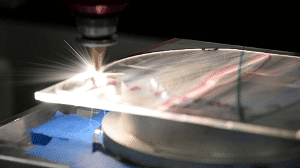 Traditionally, glass can be cut by mechanical means using a sharp and hard tool such as a diamond or carbide wheel which is scribed onto the glass along the area to be cut. Following, the glass is typically snapped by a mechanical force which causes the initial crack to propagate completely through the glass.

In recent years, with advancements in the laser market and the availability of high-power lasers at reasonable costs, many traditionally mechanical procedures, amongst them glass cutting especially in new and emerging applications, are making the transition into laser processing thanks to the improved quality and throughput that laser processing techniques can offer.

Laser cutting, being a non-contact technique, enables reducing or completely avoiding hazards introduced by mechanical techniques. For example, mechanical cutting produces micro-cracks, the snapping introduces debris and the cut edges require an additional process of grinding and polishing to make a smooth surface finish which is time consuming and increases the cost of fabrication. Laser cutting on the other hand,  minimizes the micro-cracking and small chips, doesn’t produce stress in the glass, which results in higher edge strength which is especially important in touch displays where force is constantly being applied on the glass. Moreover, laser cut glass can withstand two to three times as much force as mechanically cut glass.

One of the first methods proposed is known as laser scribe and break technique. In this method, a CO2 laser at 10.6um wavelength is typically used to heat up a narrow line along the glass which generates a crack, followed by applying a mechanical force to break the piece. Sometimes, an additional laser is used.

A more advanced method is the controlled fracture technique where thermal gradients are formed due to the absorption of light energy, resulting in thermo-mechanical stress which creates a crack in the glass. This process generally requires less laser power than the scribe and break, as it is carried out below the glass transition temperature. One example for such a setup is a hybrid combination of laser and waterjet where the laser is scanned along the cutting pattern and immediately after, the illuminated area is cooled off by liquid, resulting in a thermal shock which induces a crack along the cutting line.

The described methods are both thermal approaches, and as such, focusing of the Gaussian laser beam onto the glass is rarely sufficient to achieve high quality processing characteristics, as the focusing alone may cause liquidation of the glass at the intensity peak of the Gaussian, which will in turn result in unwanted microcracks. To overcome this, a beam shaper is often used to create a uniform intensity of energy at the needed energy threshold. The beam can also be shaped into a line or other required geometry in order to increase the throughput.

With the introduction of high energy ultra-fast pulsed (UFP) lasers, it was found that they are very useful in glass cutting due to their high energy pulses which generate mechanical stress while the short pulse reduces the thermal heating of the glass avoiding melting and microcracking issues. Not only CO2 lasers but also ones in the near IR have been found to be efficient at fast pulses. One of the limitations of this method is its efficiency for thin substrates but for thicker substrates, other solutions are required such as multiple scanning and Z movement of the scanner or laser head. Cutting thick glasses (>500um) using this technique possess unique challenges, as the laser energy needs to be both focused to a tight spot, and spread evenly in the glass depth.

Holo/Or offers several solutions to help our customers with their glass cutting needs:

For customers using the above described thermal approaches, we have a wide catalogue of Top Hat Diffractive Beam Shapers which are used to generate a flat top uniform distribution of the focused energy for accurate processing.

Other customers using UFP lasers techniques, can enjoy on of the following two available solutions:

Customers interested in a complete solution and optimal performance the DeepCleave™ Module is the best solution advised.

Others, interested in a component level solution for glass cutting, can use the Diffractive Axicon for generating an Elongated Focus Bessel-beam function. The Diffractive Axicon increases the focal depth of the beam, enabling processing of transparent materials with a single flat, thin element unlike it’s refractive counterpart. These components can be used with both single and multi-mode lasers with flexible input beam diameter and generally require external focusing optics.

Another solution offered by Holo/Or for laser glass cutting applications, is the Diffractive Multifocal DOE  which showed improved beveling results. This unique DOE splits the beam on the focal axis and generates multiple foci at controlled separations. Best results of this component are often achieved when using it along with our Multifocal module, which boasts a 0.45NA and a clear aperture of 20mm.

The focused spot is equivalent to 0.35 objective NA and is ideally suited for glass cutting of thick glasses, such as flat panels.

This module is a complete optical solution for transparent materials cutting applications. No need  for additional high NA objectives or other high cost  optics.

WHY CHOOSE DEEPCLEAVE FOR YOUR LASER GLASS CUTTING APPLICATION:

Each DeepCleave module is shipped out of our factory with a full optical characteristics and individual testing report.

See available DeepCleave modules and get a quote here.

Although alternative solutions such as a standard axicon generating a Bessel-like beam with an elongated focus distance are also applicable for laser glass cutting applications, DeepCleave is a superior solution as it “wastes” almost no energy outside the flat-top shape thanks to its sharp transfer region, unlike the standard Bessel beam solutions in which the Bessel shape, by definition, is either “overshooting” with energy above the threshold, or wasting it on a ‘tail’ of energy beneath the threshold.

These properties of the DeepCleave can be translated into the following main process advantages:

These advantages are presented in the below image illustrating the intensity along the focal axis of DeepCleave vs. an Axicon, when applying the same amount of energy to both:

Another advantage DeepCleave presents is an improved cut quality – with DeepCleave, all rings surrounding the central lobe have similar energy levels, unlike the case with a standard Bessel beam, and when setting the process threshold to just under the DeepCleave intensity level, the surrounding rings have significantly less power than the case of an axicon Bessel beam with the same DOF, resulting in less damage potential to the work sample outside the main cut line.

See available DeepCleave modules and get a quote here.

A more basic, component level solution for laser glass cutting, is the Bessel beam. A Bessel beam is generated by interference of the incident Gaussian beam upon an Axicon resulting in a long, narrow and tight filament which is effectively an elongated depth of focus (DOF) surrounded by circles of higher interference orders.

To achieve the Bessel beam elongated focus function, Holo/Or offers a Diffractive Axicon, a.k.a diffractive Elongated Focus, which is a specific type of Diffractive Optical Element (DOE), which is a window-like component which alters the phase of light going through it using microstructures that are fabricated into it.

A diffractive Elongated Focus (EF) element creates a Bessel Beam, which can then be focused using an external lens. When focused, Bessel beams have a far longer depth of focus compared to a Gaussian beam, with a corresponding decrease of energy density at focus. The Bessel beam DOF is determined by the Axicon angle while the central spot diameter is similar to the diffraction limited size. The incident beam diameter, wavelength and EFL will affect both the DOF and spot size.

See available Elongated Focus modules and get a quote here.

See available Elongated Focus modules and get a quote here.